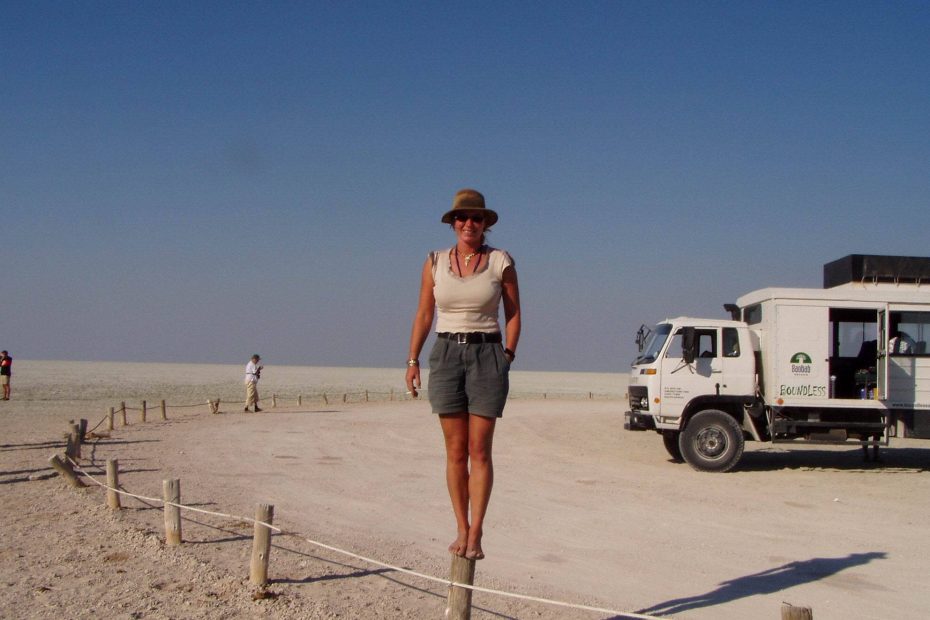 Working as a tour guide for Baobab was like a dream come true to my Africa-stricken heart. We were paid a pittance but it covered a few expenses such as beers and cigarettes, the priorities at the time. I was in my late twenties and Africa was my playground. I simply loved being this free.

I left the Netherlands for good in April 2001, and before I started working for Baobab in June on a shortened trainee trip, I did a 3-week Environmental Ranger Course through Drifters. After this I drove from Hoedspruit to Bloemfontein on my own in a rented Citi Golf. Both were spectacular adventures.

The Drifters Course was something I wanted to do, it was not required by Baobab. I felt I needed to improve on my basic knowledge of the country, its history, flora and fauna. I was very passionate but I did not feel confident that my presence as a tour guide added value to my prospective clients, so this course would make a great foundation from which to grow. The group was small (we were 9 people), consisting of three Dutch and six South Africans. Another Dutch girl and I were the only two women. It was my first proper brush with male South African (macho) culture, and needless to say I learned some valuable lessons. We started off with a 3-day hike to Cleft Peak in the Drakensberg, spending two nights in caves, which to this day is one my most memorable experiences in South Africa. I vividly remember standing on a ridge at 3,200 meters after two days of steep climbing. It was a beautiful sunny day, and the scenery took my breath away. Someone shouted, and pointed. We looked up, shading our eyes, and there was a Bearded Vulture majestically gliding a mere 10-15 meters above us. It was the most beautiful bird I had ever seen, and it was a moment etched in my mind’s eye forever, one of many more to follow that consolidated my immense respect for Nature’s wonders. A moment in which I felt incredibly alive.

The rest of the course was equally challenging, both physically and mentally, but at the end of it we all sat the exam for FGASA level 1, which I passed (I cannot remember my score though). It was a case of “the more I learn the more I realise how little I know”, but I felt a bit more confident to meet my first group this way.

The course ended at the Drifters Lodge in Balule in Hoedspruit, and instead of going back to Joburg I stayed at The Kruger Backpack, based at Nyani, which was owned and run by the legendary Bruce and Judy Meeser. I had met them on the first trip, when we stayed at the Backpack for a few nights, and I really loved their small tented backpackers, from where they had also launched their first walking safaris in the Greater Kruger under the banner Transfrontiers. At the time the main reason to go back there was to visit Garth, who was my tour guide on the first trip, and who had since joined the team of Transfrontiers as a trails guide. We had had an affair on the trip and I wanted to see him to find out if there was anything worthwhile, but it was not meant to be. We were semi-together for a little while, but then he broke my heart with someone else, and that was that. By then I had become firm friends with Bruce and Judes and the rest of the team, and I had started helping out at the backpackers (for food and board) and on the walking trails. For the next three years I would stay with them in between my Baobab tours, and I can say without a doubt that their warmth and hospitality, as well as adventurous fun, created a sense of home and belonging in South Africa.

In 2001 the internet was a fact, but in South Africa, to put it mildly, we have always been a little behind. The analog connection (remember that login sound?) and the phone lines were more down than up and so emails sometimes took days to reach me. Cell phones did exist but signal in the Kruger region was patchy at best. In order for me to connect with Baobab from the Backpack was therefore a real challenge. I remember having to hitch rides to Hoedspruit to make a long-distance call from a pay phone or at the local “Telenet” to Baobab in Amsterdam.

Within two weeks of having finished the Drifters course I had learned that my trainee trip with Jeannette on a Hotel Tour was going to be shortened as my own first group would arrive half-way through. She would train me for the first week of a trip, and would then drop me off in Graaff Reinet from where I would catch a bus back to Cape Town. Vincent, my contact the first year at Baobab, and I agreed that I would drive the other two weeks of the trip on my own from Hoedspruit to Bloemfontein, so that I could at least learn the roads and meet the people at the accommodations. The first year I was assigned primarily to 24-day Hotel Tours, a rather inapt name as people only stayed in a hotel upon arrival and the night before departure, and the rest of the trip in chalets, rondavels and guesthouses. But I guess it wasn’t camping and they had to give it a name, so Hotel Tour it was.

Baobab rented the cheapest car available – a Citi Golf – and off I went, on the left side of the road for the first time in my life. Prior to this trip I had not driven a car farther than 20 km’s. For two weeks I bumbled around, studying and memorising the route the night before, a map on the passenger seat as there was no such thing as a GPS, navigating potholed roads through tribal lands, covering Mpumalanga, Kwazulu Natal, the Drakensberg and the Kingdoms of Swaziland and Lesotho. How I managed to keep that tiny little Golf in one piece on some roads is still a mystery (the 4×4 training we did on the course still fresh in my mind however), and there were many hair-raising moments, but I couldn’t have asked for a more challenging adventure. I had a blast. I dropped off the car in Bloemfontein and from there I caught a bus to Cape Town. The real adventure was about to start.

I will never forget my first group. I was so nervous I barely slept the night before. When I collected them from the airport and brought them back to the Tulip Inn, I was still a nervous wreck. I had been advised to “fake it until you make it” but being Dutch I decided that honesty was the best policy, and so I shared with them that this trip was my first tour with guests. I think it was the right choice, as it helped me to relax and just do the best I could. I am very organised and “paraat” by nature, so that part of being a tour guide came easy to me, but being with people 24/7 and being regarded as the “expert” was new. I learned a lot from their questions, forcing me to keep studying and increasing my knowledge, and I sensed I gained people’s respect when I admitted to not knowing the answer but promising to find out for them. That first trip went very well, and Baobab was very happy with the raving reviews I had received from the clients. My confidence grew after that, and later on in the year I was allocated to guide the first 24-day camping safaris through South Africa, Swaziland and Lesotho. When a spot opened up to guide the 28-day camping safari through SA, Namibia, Botswana and Zimbabwe and they offered it to me, I enthusiastically jumped on the opportunity.

From the end of 2001 until the end of 2003 I had the privilege of guiding many engaging groups, introducing them to the wonders of the Mother City, Fish River Canyon, Sossusvlei, Etosha, the Caprivi strip, Chobe, Vic Falls, Matobo Hills, Kruger National Park and much more in between, and not once did I tire of the scenery. Camping in these magnificent parks and wilderness areas in those days was always magical, inspiring and humbling. Every day and every visit was a new adventure, and travelling around Southern Africa with Baobab solidified my desire to remain in Africa. I met some wonderful people, some of whom I am still friends with today, but in the end it was being with people 24/7 that made me resign at the end of 2003. I was not far off from becoming a raging alcoholic, as that was the only way I could deal with the constant beck-and-call. I am extrovert to a point, but I also really like spending time on my own, and especially travelling I prefer doing alone. It had been a fun and incredible learning experience, but it was time for another chapter. At the end of 2003, I started working full-time at Transfrontiers. 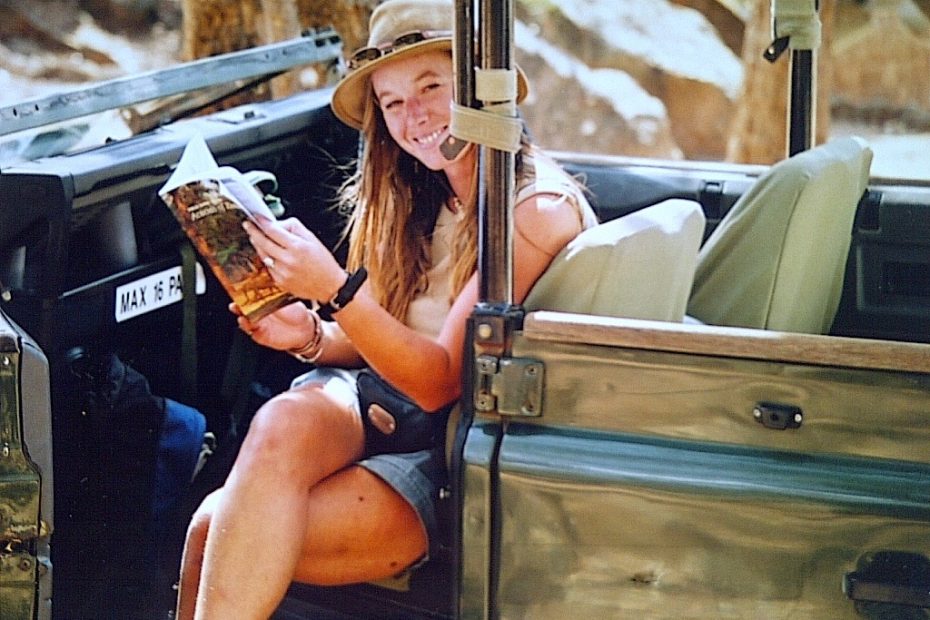 We use cookies on our website to give you the most relevant experience by remembering your preferences and repeat visits. By clicking “Accept”, you consent to the use of ALL the cookies.
Do not sell my personal information.
Cookie SettingsAccept
Manage consent

This website uses cookies to improve your experience while you navigate through the website. Out of these, the cookies that are categorized as necessary are stored on your browser as they are essential for the working of basic functionalities of the website. We also use third-party cookies that help us analyze and understand how you use this website. These cookies will be stored in your browser only with your consent. You also have the option to opt-out of these cookies. But opting out of some of these cookies may affect your browsing experience.
Necessary Always Enabled
Necessary cookies are absolutely essential for the website to function properly. These cookies ensure basic functionalities and security features of the website, anonymously.
Functional
Functional cookies help to perform certain functionalities like sharing the content of the website on social media platforms, collect feedbacks, and other third-party features.
Performance
Performance cookies are used to understand and analyze the key performance indexes of the website which helps in delivering a better user experience for the visitors.
Analytics
Analytical cookies are used to understand how visitors interact with the website. These cookies help provide information on metrics the number of visitors, bounce rate, traffic source, etc.
Advertisement
Advertisement cookies are used to provide visitors with relevant ads and marketing campaigns. These cookies track visitors across websites and collect information to provide customized ads.
Others
Other uncategorized cookies are those that are being analyzed and have not been classified into a category as yet.
SAVE & ACCEPT
Scroll Up